We have updated our scenarios to take account of a range of new data, and the latest input from our household surveys. A peak to trough fall of 20-30% over 2-3 years remains our base case, but with risks to the downside. On the other hand the RBA’s base case gets only a 1% probability now. 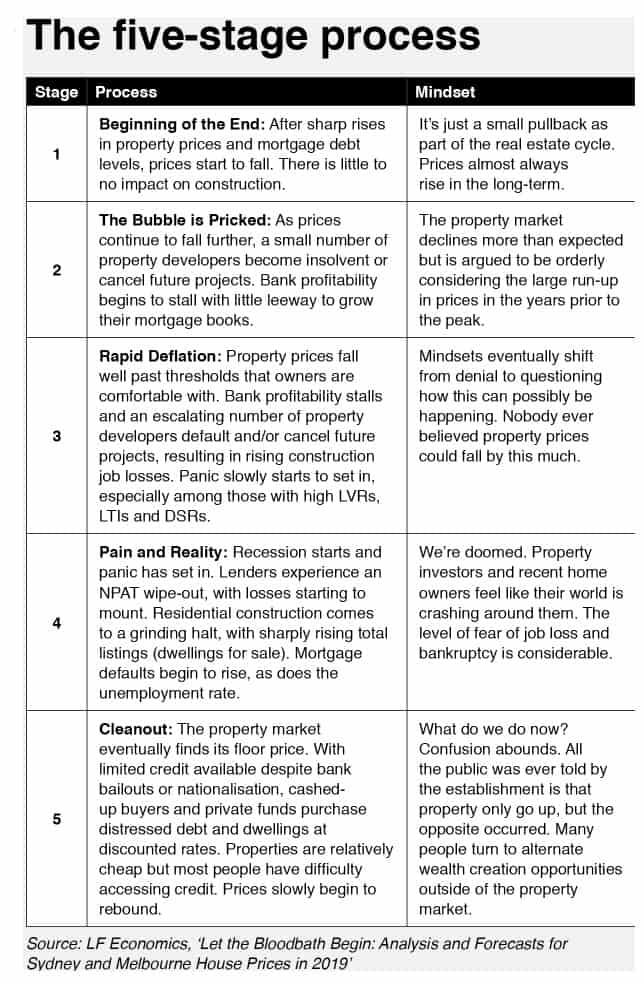 1.     Lower inflation and growth rates ahead according to the RBA

Things Can Only Get Better: Economy is weaker, as wages continue to grow only slowly, costs rise, and RBA cuts later in the year. Some Government tax stimulation either before or after the election, or both. Some easing of credit rules so lending growth accelerates.

Not Yet Doomsday: A locally driven downturn, as wages are flat, despite some mortgage rate repricing. RBA cuts significantly. Employment rises, and one Bank requires assistance. Fiscal stimulus does not have significant impact as household consumption falls.

Ireland 2.0: International crisis overlaid on scenario 2, with QE and lower rates, in response. May be from Europe (Brexit), China, or US, or some combination as global growth falls. In response cash rate is cut hard to zero bounds, QE in Australia commences, and banks are rescued/restructured via bail in and bail out.

Iceland 2.0: As above, but no bank rescues, so banks fail. RBA moves to negative interest rates (see Japan).

We discussed these scenarios during our live stream Q&A event last night. Here is the edited version of the event:

I could quibble with some of those macroeconomic forecasts but on the whole the scenarios are reasonable enough. I agree we are on the path to scenario three. Good job Mr North.

As for the lunatic RBA and its preposterous outlook, no words can capture how bad its analysis from yesterday’s minutes is:

Members noted that some of the dynamics in housing prices could be explained by the fact that the supply of housing does not respond quickly to changes in demand. In particular, the run-up in housing prices had occurred during a period when housing supply had not picked up sufficiently to match higher demand from more rapid population growth. Over time, higher housing prices had eventually led to a sizeable increase in supply, but this had taken longer than in previous cycles. Another factor weighing on prices was a noticeable decline in demand from foreign buyers in recent years, which had also been apparent in housing markets in some other economies.”

What ridiculous partial analysis, completely ignoring that it was the RBA itself that cut the cash rate 275bps between 2012-2016 while also trashing the macroprudential regulatory response to slow lending on interest only loans and to investors.

Of course it did so because it was scrambling to cover its arse after the Bank mistook a two year mining investment spike for thirty year boom.

History will remember the Stevens and Lowe RBAs as monetary dills without equal.original article found here.