Sixty per cent of Aussie homes include pet ownership. At the same time, advertising property rentals that accommodate four-legged family members account for only 10 per cent of the available rental homes for pet owners.

Twenty thousand cats and dogs get euthanised because their owners say they aren't welcome in a rental home.

Companion Animal Network Australia's (CANS) new Rent with Pets program is attempting to change rental laws, give those renting the joy of a puppy or cat (named on your lease), and prevent pets from becoming homeless.

Rent with Pets provides information and resources in support of tenants and landlords to be responsible pet owner tenants and welcoming pet-friendly rental laws.

The RSPCA estimates that 15% to 30% of animal surrenders are from pet owners who could not keep their pets when moving into a new rental property.

Australian pet shelters and rescues are over-populated, and according to the RSPCA, it is due to being unable to take pets when they move into a non-pet-friendly property. When this happens, pets are surrendered or abandoned entirely.

73% experienced rental or strata accommodation where pets weren't allowed, and 42% had chosen not to have a pet because of concerns in accessing pet-friendly accommodation.

Approximately half of the households with pets believe future housing opportunities are almost non-existent, as pet-owning renters almost all report feeling insecure about their flatmate being furry.

But while some laws are changing, there is still too much uncertainty across the housing system. As a result, pets are often the victims when people need to relocate and can't take their dogs or cats with them.

A third of Australian households rent their homes, and almost 2.5 million of us are in apartments; the rising need for a consistent pet-friendly housing policy across the country is imperative.

Strata is moving in line with community wants, and the new laws will offer apartment renters greater power over what they do in their own homes.

The NSW government said corporations can still refuse an apartment owner to keep an animal if there is damage to the common property, menacing behaviour, persistent noise and odour.

Strata corps will set conditions for keeping pets, such as supervision on common property or being held while entering and exiting an entrance or lift.

Do the states love pets?

Standard residential tenancy agreements issued by Fair Trading NSW include an optional term requiring the landlord's consent, restrictions on the type of animal, and if carpets need to cleaning at the termination of your lease.

It's up to landlords to accept, or they need to submit the refusal, along with their reasoning, to the state's Civil & Administrative Tribunal. From there, the tribunal has the final call on the situation and whether the renter's request is reasonable.

You need the landlord's permission, and there's not much that you can do if refused. The government will bring similar reforms to Victoria to make things friendlier for pet-loving renters.

You must complete a consent form; if refused consent to a pet, your landlord must seek an order from VCAT to restrict the pet.

You need the landlord's permission to keep pets, and it's totally up to them with little room to appeal if they say no.

Technically there are no clauses covering pets and rentals. It's up to the landlord when there's a no-pet clause in the agreement though tenants can apply to NTCAT to remove or change the clause because it is harsh or excessive.

You'll require written permission to get a pet, and your landlord can charge a 'pet bond' up to $260.

Additional to your common bond to cover extra cleaning or repairs. With so many differences in laws and strata, it is not an easy process to add a fur baby as your flatmate.

Regulations are changing, and it is getting better for pet owners, but it is wise to check your state laws and prepare for a challenging audition process before signing on the dotted line. 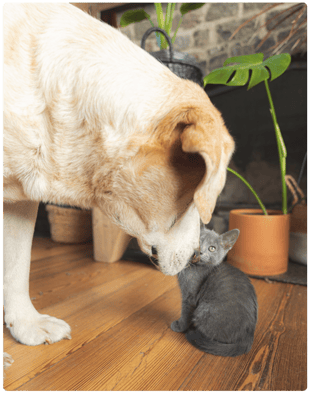